Switch to the dark mode that's kinder on your eyes at night time.

Switch to the light mode that's kinder on your eyes at day time.

Switch to the dark mode that's kinder on your eyes at night time.

Switch to the light mode that's kinder on your eyes at day time.

“I am just so happy to be back!” Janine Teagues (Quinta Brunson) squeals in the opening scene of Abbott Elementary’s second season. Janine is excited to get into the classroom again and prove she has it all together this year (and for her colleagues to notice she parted her hair on the other side), but I imagine Brunson is also thrilled to be back: After an historic three Emmy nominations, she nabbed her first win (Outstanding Writing for a Comedy Series for the pilot), while the show picked up two more statues.

It’s well-established that a sitcom takes time to find its footing. Go back and rewatch the first seasons of Parks And Recreation or The Office and you’ll see that things feel a little off compared to the comedic timings and dynamic chemistries they became known for. Thanks to Brunson’s clear vision and specificity as a Philly local, though, Abbott Elementary showed a rare confidence in its first outing. And it’s exciting to think that with time and development, the show is going to become even funnier and deeper as it goes on. The good news: The laughs came more frequently in the back half of season one, and this season-two premiere doesn’t skip a beat.

We pick up with the gang on the titular “Development Day,” with the teachers returning from summer break to prepare their classrooms before the students arrive. Janine assures the audience and her colleagues that she “fast-tracked” her breakup with Tariq (Zach Fox), which is basically Chekhov’s “Janine is going to have a meltdown” for the episode. This year is going to be different! But when she gets to school and tries to park, she finds that Ava (Janelle James) has commandeered the parking lot to charge Eagles fans to tailgate. So…not that different.

We get a quick rundown of what everyone did for the summer: Jacob (Chris Perfetti) taught abroad in Peru and took an ASL class (“I wasn’t inspired by CODA, per se, but…”); Barbara (Sheryl Lee Ralph–also an Emmy winner) lost her shoes on an all-inclusive cruise while extremely inebriated (“Sea Barbara is different than Land Barbara”); Melissa (Lisa Ann Walter) was down on the Jersey shore with Gary the vending machine guy; and Gregory (Tyler James Williams) dove into the first-grade curriculum since he’s now a full-time teacher.

During her morning address in the gym, Ava throws a few summer thirst traps of herself up on the screen for Gregory’s benefit before sharing the agenda for the day. Janine has planned a teacher’s mixer, and when she mentions her “wisdom swap” idea, Barbara and Melissa are quick to tell her it won’t work. She starts to argue but then stops herself—“I don’t have to change your minds, because it’s mandatory”— in a show of confidence that impresses the veteran teachers. Between that and the reveal that she’s snagged “the only celebrity that matters” to surprise the kids on the first day of school (Gritty, the terrifying Flyers mascot), Janine is stepping up. “Looks like somebody got it together this year,” Barbara mutters to Melissa.

The team is quickly bogged down in the administrative nightmares of the public-school system. Although Barbara succeeded in getting a ramp installed at the school, she’s getting the runaround from the district about an accessible desk for her upcoming student who uses a wheelchair. Melissa, poor soul, is now a combined second and third grade teacher with ten extra students because there weren’t enough kids to justify another class. 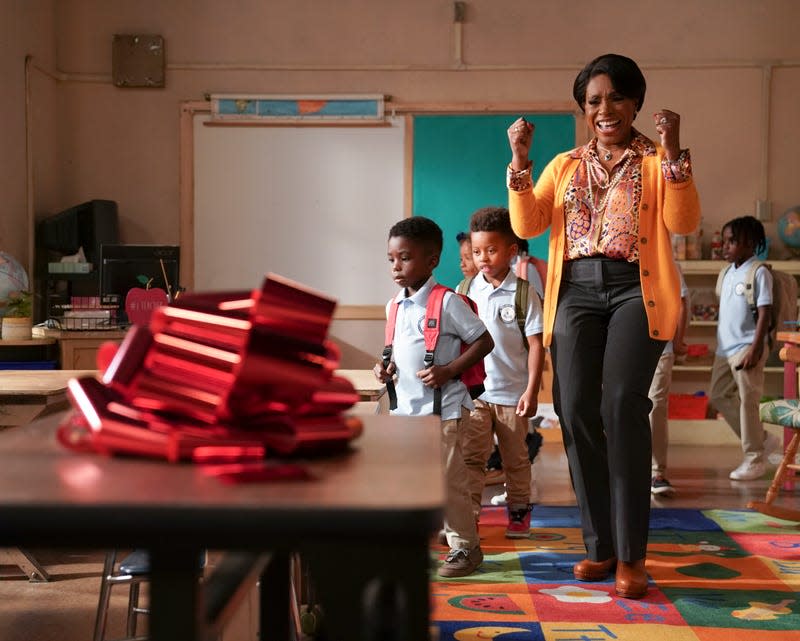 But no one is freaking out like Gregory, who can’t believe how much material the school-board-mandated curriculum expects first graders to learn in a year. He maps out everything in a very detailed schedule on his white board, with headshots of each of his kids fixed to their desks. His classroom isn’t as bad as John Nash’s office in A Beautiful Mind, but it has similar vibes.

And as for sweet Janine, the preordained meltdown comes to mess up her hot streak, right on schedule. As she and Jacob brainstorm an icebreaker for her mixer, he sees threatening emails from her landlord because she’s three months behind on rent now that Tariq is out of the picture. Janine brushes off Jacob’s concern, but right in the middle of her mixer, Mr. Johnson (William Stanford Davis) comes to inform the group that her car is getting a boot for unpaid parking tickets. (They were Tariq’s, and she used to pay them, but “in an act of maturity, I haven’t since we split.”) And of course, as she fails to plead her way out of that mess, Gritty shows up because she accidentally told him to come on development day instead of the first day of school. Oops.

Her image of having it all together shattered, Janine gets some heart-to-heart advice from Barbara and Melissa: You have to go through a breakup, not over it. Healing is part of the process.

Janine ruminates on this as we see the teachers welcoming students for the first day. It’s a beautiful sequence that reinforces Abbott Elementary’s beating heart. Forget the jokes about Jacob’s try-hard obsession with ASL. Seeing him sign with a deaf student is genuinely moving. Barbara wheels her new student into her classroom only to discover that Gregory found an ADA-compliant desk in storage. Threading the needle between heart and humor isn’t easy, but Abbott Elementary is at the top of the class.

Do you want to receive more articles?

Hey, Looking for a fun place to learn new great things every day?

Back to Top
Close
We use cookies on our website to give you the most relevant experience by remembering your preferences and repeat visits. By clicking “Accept All”, you consent to the use of ALL the cookies. However, you may visit "Cookie Settings" to provide a controlled consent.
Cookie SettingsAccept All
Manage consent

This website uses cookies to improve your experience while you navigate through the website. Out of these, the cookies that are categorized as necessary are stored on your browser as they are essential for the working of basic functionalities of the website. We also use third-party cookies that help us analyze and understand how you use this website. These cookies will be stored in your browser only with your consent. You also have the option to opt-out of these cookies. But opting out of some of these cookies may affect your browsing experience.
Necessary Always Enabled
Necessary cookies are absolutely essential for the website to function properly. These cookies ensure basic functionalities and security features of the website, anonymously.
Functional
Functional cookies help to perform certain functionalities like sharing the content of the website on social media platforms, collect feedbacks, and other third-party features.
Performance
Performance cookies are used to understand and analyze the key performance indexes of the website which helps in delivering a better user experience for the visitors.
Analytics
Analytical cookies are used to understand how visitors interact with the website. These cookies help provide information on metrics the number of visitors, bounce rate, traffic source, etc.
Advertisement
Advertisement cookies are used to provide visitors with relevant ads and marketing campaigns. These cookies track visitors across websites and collect information to provide customized ads.
Others
Other uncategorized cookies are those that are being analyzed and have not been classified into a category as yet.
SAVE & ACCEPT